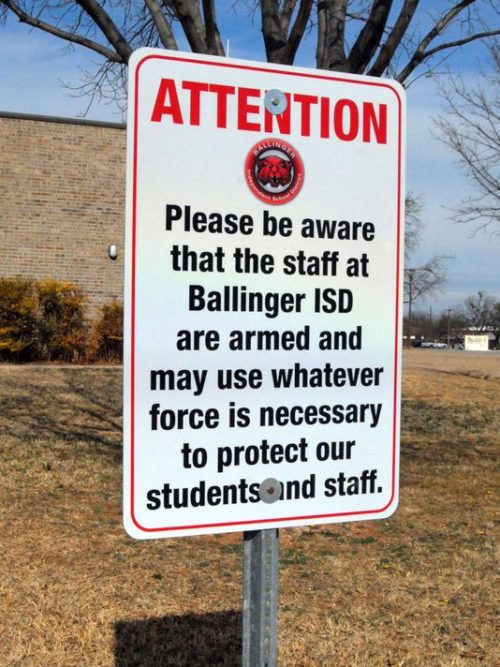 'Killing of Children Will Continue Until You Give Up Your Guns'

With gun control dominating the headlines again, it’s important to remember a few crucial facts. About 20 states have allowed teachers and staff to carry guns for the past several years, and as reported by Joy Overbeck: “There hasn’t been a single mass public shooting in any school that allows teachers and staff to carry guns legally." Also, the Crime Prevention Research Center clarified: "There has yet to be a single case of someone being wounded or killed from a shooting" at a school that allows teachers to carry concealed guns.

When emergencies occur a few well-trained and well-armed teachers or guards can quickly eliminate threats. If murderers are trying to shoot people, the number of casualties is directly related to how soon a defender with a gun can intervene.

Perhaps the greatest benefit of armed defenders is deterrence. Chances are the protectors won't even have to use their guns because doing away with gun-free zones will frighten most attackers. Criminals have confessed to being deterred by signs announcing the presence of armed defenders.

We use guns to protect politicians, banks, sporting events, jewelry stores, etc. Why don't we use them to protect schools and churches? Someone has been lying about guns and those lies are costing precious lives.

They have been telling us that getting rid of guns and having gun-free zones will save lives. Their solution to mass murder is to take guns away from potential victims and defenders. No factual basis justifies such a simple-minded proposal. On the other hand, mountains of proof verify the practical necessity of confronting deadly evil with lethal force.

Lies like this have been repeated so often that many people are starting to believe them: "We need to restrict guns to save lives. Even if it only saves one life, we need to ban guns." Could taking guns away from defenders possibly save any lives? The National Safety Council has certified that guns are used at least 2.5 million times a year to protect potential victims, and that guns are used at least 80% more often to protect lives than to take them.

Gun control is entirely fraudulent. The Democratic Party claims that guns cause violence. That’s the core claim, and it is a lie. It’s provably untrue. The places in this country that have the most guns and the loosest controls on those guns also have the least gun violence and the fewest killings. That’s the bottom line.

The evidence in favor of using guns to defend life and freedom is so overwhelming that arguing otherwise defies reality. Yet here we are with laws against teachers using guns to protect students and growing demands for gun restrictions that are likely to spawn more violence.

Why are anti-gun politicians attacking peaceful gun owners who are not part of the violence problem instead of doing things that will save lives? The answer is in their not-so-secret playbook.

The leftist radicals dominating the Biden administration are following a well-known socialist playbook which includes the following:

They have made it clear that they plan to impose all of the above using cleverly disguised Marxist vehicles such as the social justice hoax, the carbon climate hoax, CRT, ESG, and the war on families.

Advancement through the totalitarian playbook always causes shortages and suffering which result in multitudes being willing to fight for their freedom. Knowing that it was easier to abolish basic rights and crush resistance when the populace was unarmed, Russia, Germany, China, and Venezuela confiscated guns as soon as they could.

Countries headed into socialism typically disarm their citizens "for their own safety." Of course, the actual reason was to eliminate armed resistance to oppression. This disarmament scheme works so well that socialists have seized and maintained power by killing over 100 million defenseless people in the last century.

The radical leftist forces behind Biden know that gun rights are protected by the 2nd amendment, and they know our history, which includes this gem from Texas:

When a government has ceased to protect the lives, liberty, and property of the people, from whom its legitimate powers are derived … [and] becomes an instrument in the hands of evil rulers for their oppression… [and has] demanded us to deliver up our arms, which are essential to our defense, the rightful property of freemen, and formidable only to tyrannical governments ... The necessity of self-preservation, therefore, now decrees our eternal political separation." (Declaration)

Leftists know that it is difficult to dominate freedom-loving people who own guns, so they are trying to trick us into disarming ourselves. But how can they possibly swindle us out of the guns we need to preserve life and freedom?

The answer is on the news every day: Continued rejection of laws that actually protect children combined with firearm infringement demands. They are holding children hostage, in exchange for disarmament. Consider all the truth in this imaginary dialogue:

Question from School Board: Gun-free zones are being targeted by killers. Will you allow us to have weapons of self-defense where they are needed most?
Leftist Answer: The killings that happen in gun-free zones will have to continue until we can pass common sense gun laws, including universal registration and confiscation.
Question from Guards: We have the training and guns to protect schools and churches. Will you allow us to guard them before more children are killed?
Leftist Answer: You and your guns are scary and dangerous. To protect the children, we're going to use red flag laws to take away all your firearms.
Question from Teachers: Will you allow some of us to get training, carry concealed weapons, and use them to protect students and unarmed staff?
Leftist Answer: You cannot be trusted with guns, especially those with enough bullets to stop multiple attackers. We are going to outlaw semiautomatic firearms and high-capacity magazines.
Question from Parents: We intend to protect our families. We insist that our children be protected in schools and churches. What are you going to do about it?
Traitor Joe Answer: Let me be perfectly clear, we will allow children to be killed until you surrender your guns so that we can enforce socialistic controls without armed opposition.
Citizen Question: If we surrender our guns, will you stop the killing?
Totalitarian Answer: If you had studied history, you would know that the real killing starts after we get the guns.

This is the big reveal, the moment of truth, the look behind the curtain—the current rush for gun control is not factually based on saving lives. Quite the opposite, it is proof that ruling radical subterfuge is costing lives and that Traitor Joe is in the process of violating the constitution, which protects life and freedom by stipulating that firearm rights "shall not be infringed."