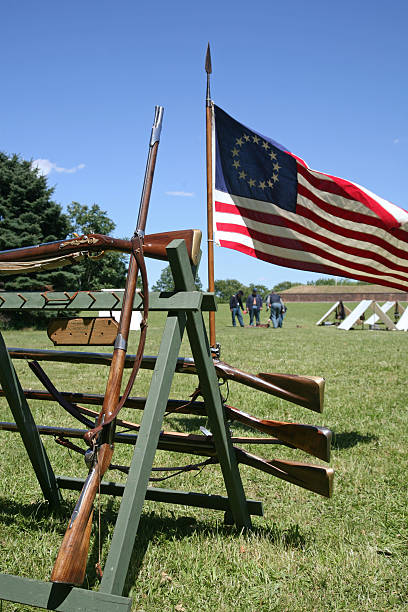 The English king and British Empire exercised oppressive control over the American colonies. Specifically, the king maintained economic dominance with oppressive regulations and high taxes. When the Patriots resisted, the Crown attempted to force the population into submission. Since the armed population exceeded the number of enforcers it quickly became clear that gun control measures would be necessary in order to maintain British tyranny. The Patriots correctly surmised that if they lost their firearms, they could easily be deprived of everything else. British attempts to confiscate munitions were primary causes of the first battles of the revolutionary war.

Many are not aware that the current democrat contenders for the presidency are demanding taxes and controls that far exceed what the Crown was trying to impose in 1775. It's shocking that a majority of early Americans were willing to fight and die rather than submit to what many current Americans are willing to vote away.

● In 1775 many Americans were experiencing oppression and were willing to fight for freedom.

● In 2020 many Americans are experiencing freedom and are willing to vote for oppression.

One year into the Revolutionary War the Patriots produced and committed themselves to the Declaration of Independence, which brought great clarity to their struggle and helped them win the war. The following parts of that document seem to have equal application to our ongoing political quandary:

"We hold these truths to be self-evident, that all men are created equal, that they are endowed by their Creator with certain unalienable Rights, that among these are Life, Liberty and the pursuit of Happiness … But when a long train of abuses and usurpations .. evinces a design to reduce them under absolute Despotism, it is their right, it is their duty, to throw off such Government, and to provide new Guards for their future security … [We therefore] solemnly publish and declare, That these united Colonies are, and of Right ought to be Free and Independent … And for the support of this Declaration, with a firm reliance on the protection of divine Providence, we mutually pledge to each other our Lives, our Fortunes and our sacred Honor."

In November of 2020 we will have the opportunity and responsibility to vote with the Patriots perpetuating a government founded on Life, Liberty, Freedom, and the pursuit of Happiness. We also have the option to vote with the modern-day King's Men who are seeking government control over everyone and everything.

If those seeking more government control end up being in charge, it could result in greater understanding and appreciation for founding fathers like Patrick Henry, who said: "Is life so dear, or peace so sweet, as to be purchased at the price of chains and slavery? Forbid it, Almighty God! I know not what course others may take; but as for me, give me liberty or give me death!"

Those who hope to perpetuate American liberty and sovereignty need to make wise political choices. It's hard to comprehend that anyone would vote against their own freedom, family, and property by siding with the King's Men.

Please do not misunderstand. None of my writings should be interpreted as being supportive of illicit violence. As a matter of fact, I am hoping and calling for compassion and peace.