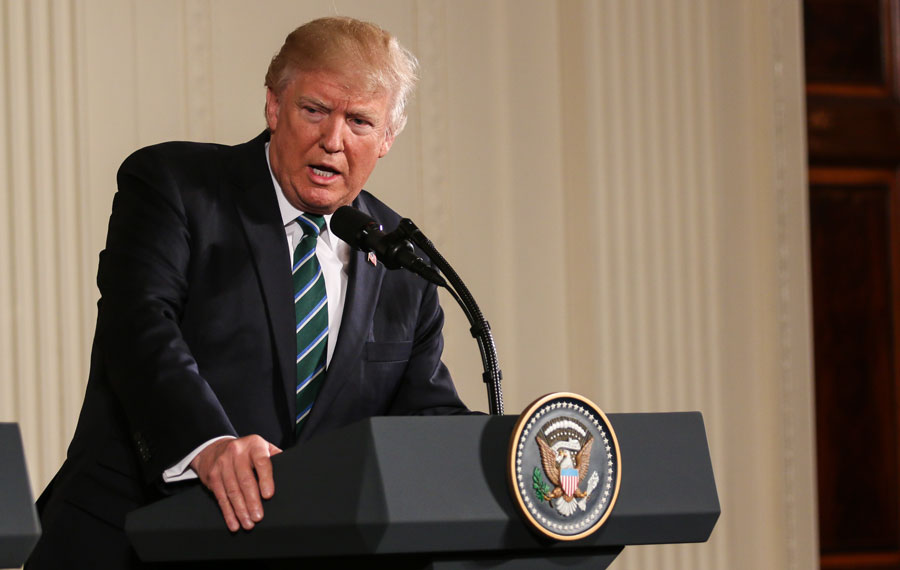 For more than three years, we have witnessed a unique phenomenon in American history. A relentless cabal of politicians, journalists, and celebrities has wallowed in the mire of presidential character assassination. Other presidents have been attacked but this is different. We have observed coverage that is almost all negatively dishonest. The only thing comparable was the opposite coverage of President Obama which was almost all positively dishonest.

Every picture, quote, and description of Obama was carefully crafted to make him look good in spite of the fact that incompetence, narcissism, and corruption oozed from his slick facade. Legitimate criticism was instantly dismissed as racism. On the other hand, everything Trump says and does is demonized and he is always depicted in the worst way possible. None of this shockingly obvious propaganda is surprising since the left's lifeblood is deception. What is surprising is that any of the rest of us have been naive enough to believe it.

Our enemies know that Trump stands between them and power, and they know that they can't beat him or us in a fair fight. Their problem is that Trump's traditional values and actual accomplishments ought to easily catapult him into a second term. Since they cannot win based on policy or principle, they have resorted to shallow and dishonest personal attacks. If they can trick us into betrayal of our foremost freedom fighter, we will be in their power.

We are aware that Donald Trump has faults and weaknesses, but they have been chronicled and villainized ad infinitum. It's past time to stem the tide of filth being slung at our intrepid leader by assessing some of his virtues. I have researched and compiled a list of 47 positive Trump characteristics. Let's highlight a few of them using some insightful quotations. Many additional examples could be cited.

Courage – "Trump has a spine of titanium. He has guts …This is a war for the heart and soul of America. This is a war against the forces of darkness who are raging against truth, liberty, innocence (especially the unborn), and righteousness. 'For we do not wrestle against flesh and blood, but against principalities, against powers, against the rulers of the darkness of this age, against spiritual hosts of wickedness in the heavenly places' (Ephesians 6:12). This is ultimately a war to prevent the light of freedom, truth, and justice from being extinguished across this blessed land. As C.S. Lewis reminds us, '[t]here is no neutral ground in the universe. Every square inch, every split second is claimed by God, and counterclaimed by Satan' … We finally have a worthy warrior in the White House." (Chris Banescu)

“It is not the critic who counts; not the man who points out how the strong man stumbles, or where the doer of deeds could have done them better. The credit belongs to the man who is actually in the arena, whose face is marred by dust and sweat and blood; who strives valiantly; who errs, who comes short again and again, because there is no effort without error and shortcoming; but who does actually strive to do the deeds; who knows great enthusiasms, the great devotions; who spends himself in a worthy cause; who at the best knows in the end the triumph of high achievement, and who at the worst, if he fails, at least fails while daring greatly, so that his place shall never be with those cold and timid souls who neither know victory nor defeat.” (Catholics/Roosevelt)

Fortitude – "Really, if it was not for the fortitude of one man, President Trump, to stand up for the Constitution, his office and the American people, and grave, irreparable damage might have been inflicted on the republic – a dark alternate reality where the national security apparatus selects the President and political opponents are destroyed with malicious fantasies fabricated by secret political ops." (Robert Romano)

Patriotic – "Trump delivered his combative speech in the midst of the very establishment he is attempting to overthrow. Surrounded by Bushes, Clintons, Obamas, Bidens, and Ryans, Trump aligned himself with the crowd against the celebrities and VIPs on the dais. Mass rallies, social media, and sheer force of personality are his weapons as he attempts to defenestrate the ruling class in Washington and bring a new spirit of patriotism to America." (Matthew Continetti)

Freedom Fighter – "Consider the fear that Carville and his ilk must harbor about what is to come. What does he see [in Trump] that makes him tremble so? In a word, greatness … When you see a man being endlessly ridiculed and scorned brush off those insults with ease and smile back, you know something is different … We are all witnesses to history’s play, but few generations see a world-historical figure ascend to its stage … He has exposed both major parties as socialist globalist cults more concerned with government health care and foreign nation-building than a policy for American freedom … More than anyone on the world stage, he argues for individual freedom as the indispensable ingredient for civilization itself and free nations as the essential bulwark against international governance and tyranny." (J.B. Shurk)

"Enter Donald Trump, a savvy business tycoon from New York who loves America and … Their plans for a socialist state were ruined. The one-sided media became so triggered and insane they started making up stories about Trump and reporting it as the truth … Trump swore he would Make America Great Again and is doing it. He’s not afraid of the attacks on him and if you hit him he hits back twice as hard. (Jim Clayton)

Forthright – "He says what he thinks, is remarkably accessible … he demonstrates a guilelessness and, shall we say, honesty quite unlike any politician, past or present … His rhetorical style is, to say the least, unconventional but often effective. By talking like a real person and not trafficking in platitudes and liberal pieties, he has made it difficult for conventional politicians to do their thing. (Saritha Prabhu)

Generous – "I’ve had the opportunity to cover Trump for over a decade, and in all my years covering him I’ve never heard anything negative about the man until he announced he was running for president. Keep in mind, I got paid a lot of money to dig up dirt on celebrities like Trump for a living so a scandalous story on the famous billionaire could’ve potentially sold a lot of magazines and would’ve been a “yuge” feather in my cap. Instead, I found that he doesn’t drink alcohol or do drugs, he’s a hardworking businessman and totally devoted to his beloved wife and children. On top of that, he’s one of the most generous celebrities in the world … Trump’s kindness knows no bounds and his generosity has and continues to touch the lives of people from every sex, race and religion. When Trump sees someone in need, he wants to help." (Liz Crokin)

Negotiator Extraordinaire – "Way back in 1987, Donald Trump wrote a book that was part autobiography and part extended essay on how to become a winning negotiator and business dealmaker. The Art of the Deal became a #1 bestseller … Each of Trump's tactics is listed below, accompanied by quotes from the book. Give them a try and see how they can turn your deals into winners, too." (Peter Economy)

There is no shortage of liars telling us that Trump is a lousy negotiator. Funny thing how none of them has ever negotiated billion-dollar deals, amazingly beneficial international agreements, or have written the best book on the subject.

Tactical Genius – "But what is most impressive about Trump the man is something that would be a weakness in any other. He delights in fighting -- with unflagging energy -- the messy tactical engagements his political enemies force upon him, which would overwhelm a weaker man. But through all this Trump, the president has been implementing his political strategy as if the constant skirmishes with those trying to unseat him are a mere inconvenience … Trump has a genius for getting people to under-estimate him. And he is still doing it." (Wen Wryte)

Protector – "Measured against eight years of a previous president intent on reducing religious liberty … President Trump’s actions are, indeed, historic. But it’s worth looking over our shoulder to see what actions the president actually took to defend the religious liberty of all Americans. Five major accomplishments stand out." (Kelly Shackelford)

Compassionate – "'I think the president was very receiving,” she reportedly said. “He’s very compassionate. He did assure each family member that we would and should expect change' … 'Many of these families lost their loved ones in deadly interactions with police,' Trump said, according to AJC. 'To all of the hurting families, I want you to know that all Americans mourn by your side. Your loved ones will not have died in vain. We are one nation, we grieve together, and we heal together.'" (Scott Morefield)

"Ivanka Trump Speaks of Her Father's Compassionate Side." (Video)

Contrasting some of Donald Trump's heroic qualities with his opponents tends to leave them looking callow, shallow, and spineless. It's no wonder that they are bombarding us with disinformation. How many will fall for it? America's life and liberty hang in the balance as traitors and pawns sling mud at the only one standing in the gap between us Socialist Hell.