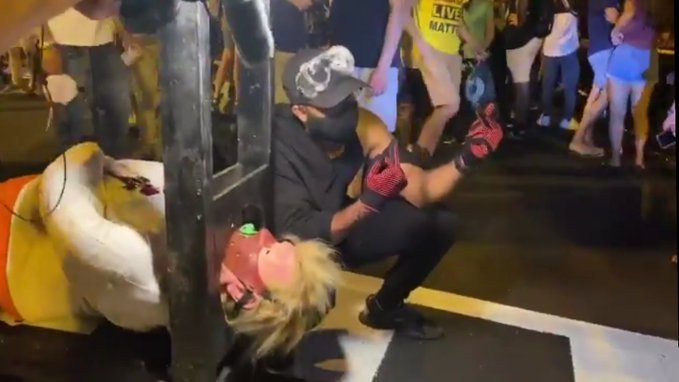 Off With Our Heads

The violent history of Marxism is unmistakable. From Russia to China to Cuba, there is no shortage of evidence that Marxism breeds and delivers mayhem and terror. Here is a list of facts that are becoming more evident and more relevant to Americans by the day:

● Marxists are willing to kill those who oppose them.

● Marxists are masters of deception.

● Marxists have taken over the democratic party.

● Marxists intend to steal or overthrow the 2020 election.

Anyone with a rudimentary understanding of history and internet access can verify these facts in just a few hours. Here is a good place to start. There is almost no effort to conceal the Marxist roots of the violent upheaval we are witnessing around the nation, and the Democrat Party is openly supporting it.

The French have seen this pattern and these tactics before. The classic story, The Scarlet Pimpernel, was based on the French revolution of the 1790s. And, as a popular song from the stage production of that story famously highlights, the primary instrument of the Jacobin Reign of Terror was the guillotine. A guillotine is described in stark terms: “An apparatus designed for efficiently carrying out executions by beheading. The device consists of a tall, upright frame with a weighted and angled blade suspended at the top. The condemned person is secured with stocks at the bottom of the frame, positioning the neck directly below the blade. The blade is then released, swiftly and forcefully decapitating the victim with a single, clean pass so that the head falls into a basket or other receptacle below.” (Wikipedia)

The guillotine was a gruesome, reliable, and exceedingly public way to eliminate one’s enemies and terrorize potential dissenters into submission. Most people who opposed the French revolutionary committee were summarily beheaded. The cry, “Off with their heads!” rang through the streets, and God help anyone who’s name was blacklisted by the unhinged, marauding masses with a guillotine in their hands. Heads of dissenters were sent rolling without evidence, trial, or legal grounding.

Beheadings were often attended by throngs of predatory people eager to see someone else pay for the perceived injustices in their lives. While the French aristocracy was certainly not without sin, the barbarity of the guillotine was a sickening display of “social justice theory” carried out to its logical extreme.

“Madame Guillotine” as it came to be known, was—and suddenly, is—a quintessential symbol of chilling disregard for the rule of law, the value of life, and the voice of the people. Recently, an effigy of President Trump in a guillotine was paraded in front of the white house. Other guillotines have been dragged through neighborhoods by angry leftists.

The gruesome point is hard to miss: "Give up your freedom, your property, and your power, or heads will roll." Considering the violent history of Marxism and the Marxist mobbing, rioting, and violent destruction currently sweeping the nation, we have no reason to disbelieve them.

There appears to be no check on the current Marxists’ desire to rule, or on their violent means of ascending to power. Democrat leaders have openly declared that the only way to stop the violence is to put them in power. This use of terror to manipulate and to exert power used to be the strategy of our most embittered enemies. It appears that using terror is now the strategy of those mingling among us as Americans in name, but traitors to America at heart.

Be assured that those dragging guillotines through the streets not only want to see President Trump’s head roll, they have already beheaded the legacy of our Founding Fathers, and intend to see America’s once-noble head resting in a basket which they can triumphantly deliver to the globalist elite waiting eagerly in the wings for America to behead itself.

Only a few months ago we were told that “democratic socialism” was kinder and gentler than communism. It sure has been a short trip from there to the guillotine.