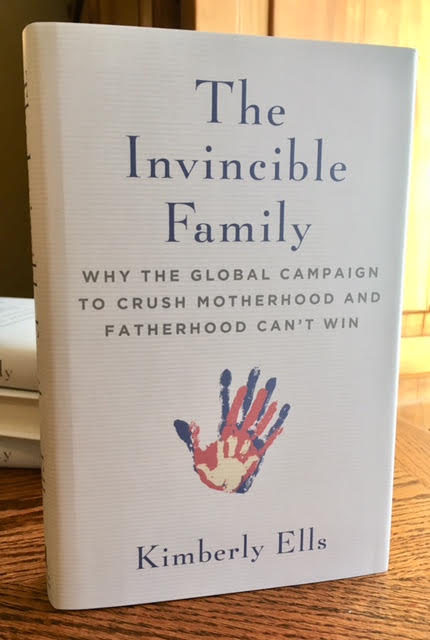 A Book the World has been Waiting for: The Invincible Family - Book Review, Part 1

The world has long needed a book that definitively explains why the family is the core unit of society, what forces are working to unhinge the family, and what can be done about it. The Invincible Family, by Kimberly Ells is just that. It brilliantly makes the case for the family and does so without relying on religious dogma or political rhetoric.

The surprising premise of the book is that babies belong to their mothers and that this fact drives all other interactions and systems in society. Ells explains:

The belonging of babies to their mothers has been and remains key to the ordered functioning of society. The preexisting and preeminent biological connection of mother and child undergirds the political, economic, and social structure of the world. If we alter or challenge the anatomical sovereignty of mothers and fathers, the consequences may prove politically, economically, and socially catastrophic. (p.4)

Ells notes that this view dovetails with the UN’s Universal Declaration of Human Rights which states, "The family is the natural and fundamental group unit of society and is entitled to protection by society and the State." However, in the shocking last section of the book, Ells exposes how the United Nations ignores this tenet of its own Declaration and is, in fact, one of the major players responsible for the current onslaught against the family.

Ells posits that mothers play an irreplaceable role not just in the upbringing of their children, but in the sustainability of societies. She says, "A mother powerfully impresses on her child what is right and wrong, what is true and untrue, what is noble and detestable, and thus establishes the foundational beliefs of societies, nations, and the world one child at a time” (p.10). Therefore, Ells argues, mothers hold the position of greatest power in the world. This is why all the power-hungry entities in the world seem determined to annihilate the mother’s bond with her child beginning with abortion and continuing through virtually every facet of life.

If the motherhood of women over the population of the world is both supremely influential and virtually indestructible, how do you usurp it or destroy it? If you want to seize the position of key influence in the world but a woman is in your way, what do you do? You must unseat the woman. You must either throw her out of her seat or get her to step down voluntarily. (p.11)

Ells explores in depth how three insidious ideologies—socialism, radical feminism, and sexual radicalism—are bent on convincing women to give up their children, either literally or ideologically, into the hands of the state. She quotes one early Russian communist who said:

Children, like soft wax, are very malleable and they should be molded into good Communists. We must rescue children from the harmful influence of the family…We must nationalize them. From the earliest days of their little lives, they must find themselves under the beneficent influence of Communist schools…To oblige the mother to give her child to the Soviet state—that is our task. (p.216)

Ells shows in stark detail how the goal of dismantling the family is being pursued today by misguided people and ill-intentioned organizations at the highest levels in society. Prepare to be astounded by what you learn from her research and her personal experiences at the United Nations.

While revering the accomplishments of early feminism, Ells exposes the troubling nature of the radical feminism that is gaining traction globally:

The radical feminist movement…[seeks] to liberate women from their own children and from the men who are the fathers of those children. This decidedly anti-mother, anti-man, anti-child, anti-gender, anti-family form of feminism that seeks to 'eroticize' human culture in a quest for equality is the type of feminism with which I do battle. (pp.24-25)

After reading Ells’ book, it becomes clear that the phrase “toxic feminism” might be more appropriate than the politically correct phrase “toxic masculinity” so prevalent today.

Throughout The Invincible Family, Ells exposes and opposes those who seek to separate parents from children, break down parental rights, and promote “sexual rights” for children. She reviews the radical works of feminist Shulamith Firestone, who is a major purveyor of these ideas:

This is Firestone’s four-pronged proposal: Remove children from the tyranny of parents, give them equal sums of money to buy whatever they want, give them political power, and let them have lots of sex. Then they will become well-behaved, peaceful, secure, loving, cooperative beings who grow up to be well-adjusted, selfless adults who carry on the feminist, socialist dream of utopian equality. It is obvious Firestone never had a child. (p.30)

If socialist coercion and control is to be most effective, the oppressed must believe their oppression is for their own good. You must convert the woman to the idea of giving up possessorship of her child voluntarily. You must get the woman to believe that the one who wishes to eliminate her child is her friend, who is defending her rights with her very best interests at heart. (p.45)

She then unveils how International Planned Parenthood Federation is one of the prime entities that has successfully employed this devious tactic. It calls itself a “women’s rights” organization, but meanwhile it takes women’s money in exchange for exploiting women’s bodies and the bodies of their unborn babies. It teaches women that their children and even their own bodies are the enemy, but that Planned Parenthood is their best friend. This tactic has worked like a charm and it is spreading hideously across the globe.

Ells connects the dots between socialism, abortion, education, and family destruction in a way that has not been done before. The result is a truly stunning book that is in turns, enlightening, horrifying, and inspiring.

Seldom have I encountered a book this extensively researched and documented. There are 72 pages of erudite notes and bibliography. By the end of this well-reasoned book, one feels the need to join Ells in the battle to save families, communities, and nations.